Visit to a safe house 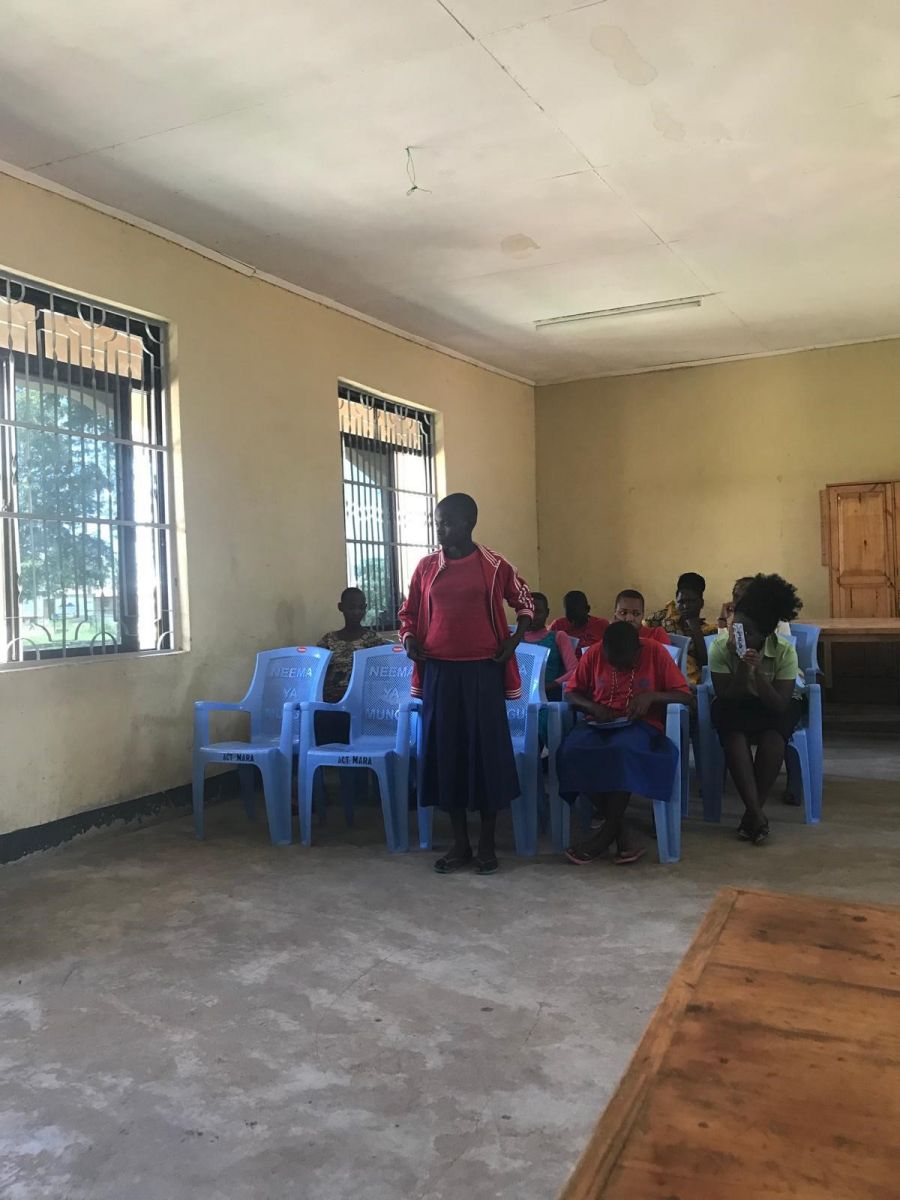 Despite being moved in all of the schools we have visited, this was by far the most harrowing visit. Nyumba Salaama is a safe house presently giving refuge to 52 girls. Eight workers (matron, secretary, social worker, computer teacher, sewing teacher, driver, temporary manager, Melina Galibona and a chaplain) all share the vision of protecting the girls from harm.

The girls come to the safe house for different reasons but mainly they are escaping FGM. In each evenly numbered year between September to December, the girls are most at risk as this is the traditional time for them to be ' cut'. Since 2009 FGM is illegal and in
2016 two women were jailed, so it appears that the government does take its eradication seriously.

Sadly, for the girls in the villages, the threat continues to be very real and is kept secret. Cutting girls is seen as a rite of passage that purifies a girl for her future marital life. It happens at any  age. There were girls at the safe house still in primary school. After their ' putification', girls can be married at whatever age.

The rite brings prestige to the family. They believe it will bring many good things and that they will bear many children. They also believe that if girls are not cut then they will die during childbirth. The truth is that more women and girls die as a result of FGM in Tanzania than from anything else.

The Safe House provides what they hope will be temporary accommodation. With the help of the  local police, the social worker, Melina and  local clergy try to reconcile girls back to their families after the danger period. Much work is being done by the parish vicars to re- educate the villagers and where the message of the Gospel is accepted, usually their ideas change on FGM too. The problem, Melina explained, is that some families are now doing cutting any time not just on an even number year and not just in those months. So some girls will now stay long term. Others do return safely and are treated as being very brave by their peers because they ran away and resisted the practice.

If they can't be rehabilitated and do need to stay at Nyumba Salaama, they are provided with uniform and sent to school. In other words, given a normal routine as far as possible in order to help them move on. Melina explained that they want to concentrate on education to help them achieve their dreams.They also seek to give them skills so that they don't need to rely on the men.

The full horror of the reality for the girls was communicated to us through the stories of some of the girls.

One father wanted his daughter to be cut. She ran to her aunt to ask for help, who told her about the safe house. She fled alone on a journey which would take two and a half hours by car.

When the first realised she had run away, he tried to find out who had helped her and vowed to kill whoever it was. When Mum knew her daughter had arrived safely, she was worried that the father would kill the aunt and asked the safe house not to say that it was the aunt that had brought her.

Dad came to the safe house and demanded her back. Melina spoke to him for two hours, but he wouldn't listen and still threatened to cut her when he got her back. He finally went away.

He returned in January and tried to take her saying he would take her back to school. But he had declared that he was going to cut her even if she had children, so they kept her at the safe house.

When they tried later to take her home again, the father said that she was not his daughter. She is still at the safe house.

Lucia
We listened to a girl (Lucia) who told us about her story. Her father wanted to cut her but her mother supported her to run away. She walked the equivalent of a 2hr car journey to get to the safe house. She is safe and is in her 3rd year at secondary school.

Maria
Maria’s parents wanted to cut her. Her uncle rescued her by giving her money to escape. She caught the bus and asked a lady walking on the street where the safe house was. She arrived at night and was taken in by the matron. They tried to return her to her village but she was not safe to stay as her mother said her father would cut her when they left. She is now permanently safe as part of the safe house.

The visit to the safe house was both harrowing and inspiring in equal measures. We were welcomed, as we have now realised is just the Tanzanian way, with warm smiles and open arms. The safe house is exactly what it says, a safe place to protect vulnerable young girls escaping threat from people who should be loving and caring for them. They arrive in an environment which envelops them in love. They are provided with a safe place to sleep, food, clothes, guidance and support. One thing which struck me was the strong sense of ensuring these young women were given the self-belief to be confident and independent. Education is key and the girls all attend school with the support of the safe house. They are also taught additional skills to provide them with the best future possible. Melina spoke so passionately about the safe house and despite the challenges she continues to strive forward to ensure the best for the girls. NO girl is EVER returned to their village if they are still under threat of harm. This is so important and is a real reality within the stories we were told.

I found the experience extremely difficult. I am the mother of a girl and the thought of any deliberate harm coming to her is something I can’t comprehend. As a mother, I protect her but in equal partnership with her father. To think of the mothers’ of some of these girls having to help them flea is just heartbreaking.

Leaving was difficult and I did it with a heavy heart but with the knowledge that I was leaving a place which stands out as being a shining example of love and protection.

The biggest challenge is money. Everything is expensive. To feed and clothe the girls is proving a challenge as they are completely reliant on charity.

As the centre is open to the local community, the girls are not completely safe. Melina would like to build a fence around the premises to make it secure, so that it truly becomes a safe house.  This would cost £16000. 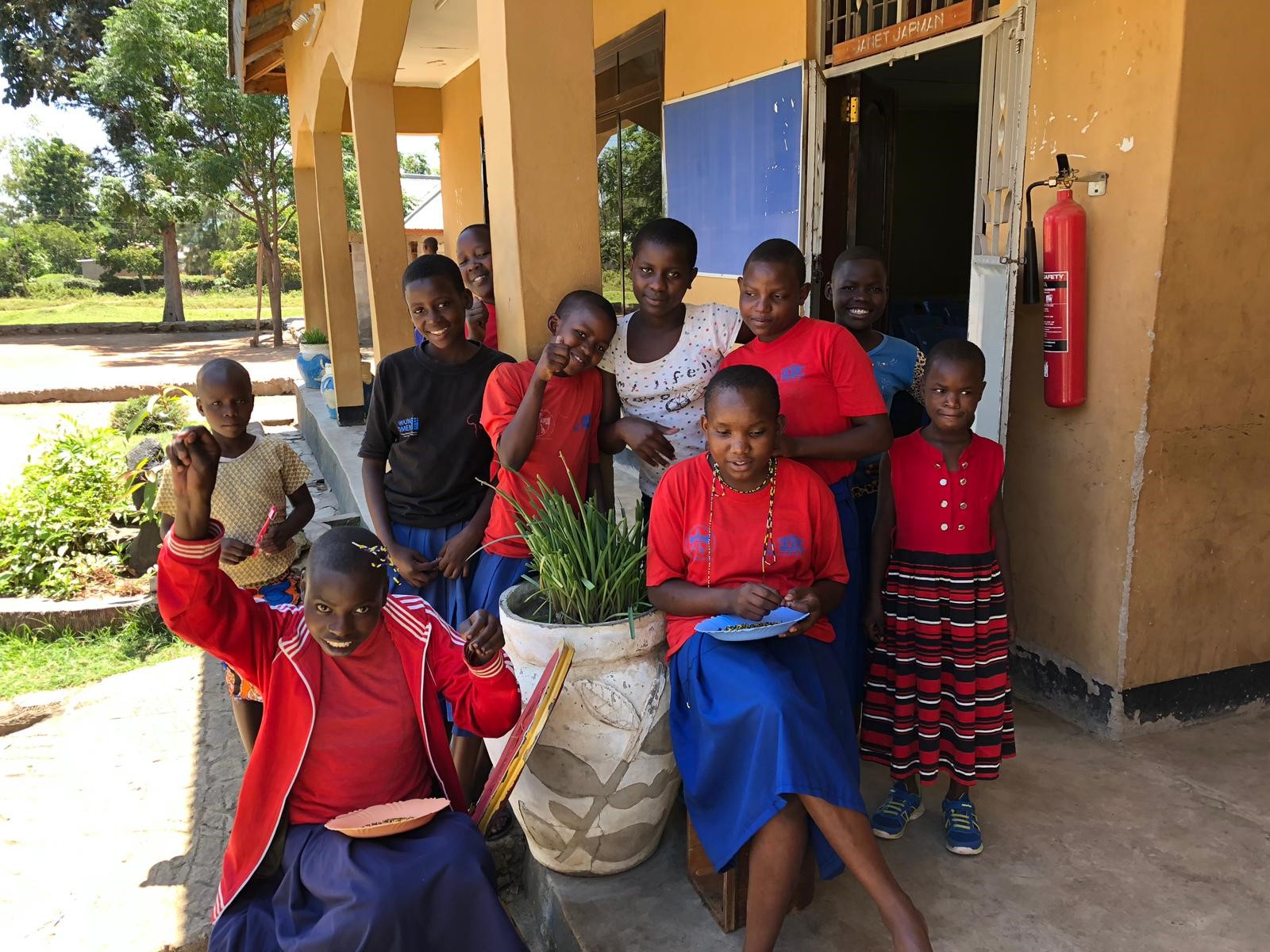 Mugumu.
Visiting the safe house in Mugumu was emotionally challenging and yet inspirational.

To see strong Christian women working as, teacher, defender, advocate and friend to girls who had been abused or faced FGM , was inspirational.

Listening to the girls tell their stories was hard and I along with others in the party listened with tears in our eyes.

The Tanzanian government has made “cutting” illegal and yet it still is common in some tribes.

Fathers mostly, insist their daughters are circumcised as this will bring a larger dowery.

The Anglican Church in Mara is working within these communities and through education hopes change will come.

Visiting the safehouse in Muguma was an emotional rollercoaster.

We met a group of girls who have fled from FGM being brought upon them and also listened to some of the girls stories.To stand up and talk about the experiences they’ve had showed a lot of courage, bravery and determination that they want to live safer life.

The safehouse and Melina provide a loving and supportive infrastructure for the girls to learn new skills (sewing) and create pathways for their future.

The safehouse doesn’t just protect the girls. They reach out to communities to teach them about FGM in hope they can reintegrate the girls back into the communities. 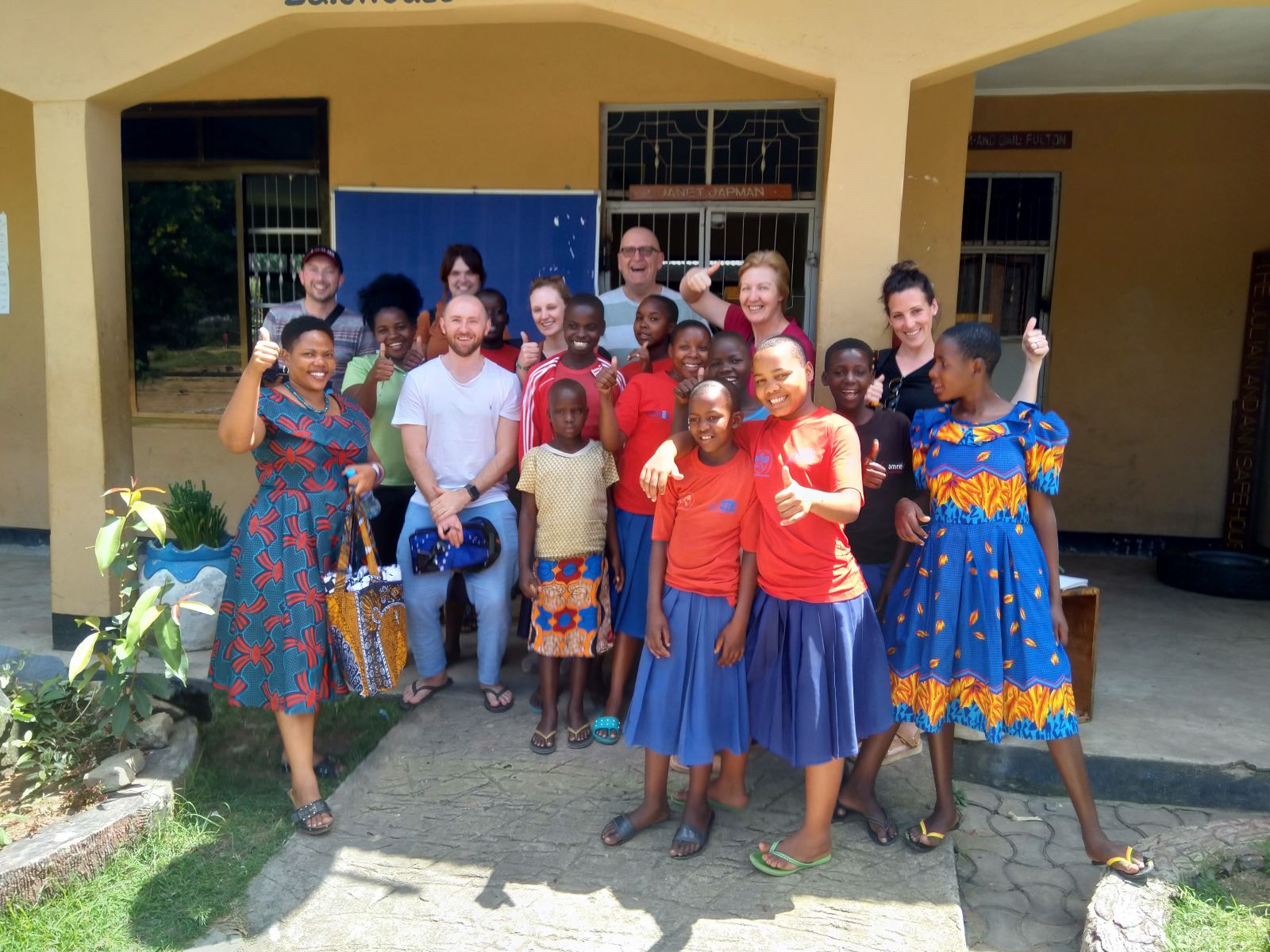 Visiting the safe house and seeing Melina and her team in action was inspirational. The care, guidance and support offered to the children along with an aspirational and resolute attitude towards this care was truly remarkable and the importance of the work shone through. The visit was extremely emotive, the stories were so hard to hear but at the same time were important to hear so that we can speak of the work and support in any way that we can. A number of girls shared their stories with the group, their bravery and trying to understanding what they had been through was difficult to process. Personally I found one story particularly difficult. As a father of an 8 year old girl, listening to a story about how another father was treating his daughter and trying to comprehend the detail was harrowing and it was impossible for me to remain composed. My little girl is my world and it really upset me that other fathers could treat the daughters in the way described. I will be supporting the safe house in the future in any way that I can. Truly remarkable!

Our visit to the safe house made me realise how strong a woman Melina truly is. On a regular basis, she is faced with the challenge of trying to reunite girls with their families after they have fled in fear of FGM or abuse. This usually involves visiting fathers, who can be threatening and aggressive, accompanied by police officers. If there is any doubt that leaving a girl with her family would not be safe, the staff take her back to the safe house. The danger involved for all parties is high and demonstrates Melina’s passion and love for the girls she protects.

As a group made up of men, women, mothers, fathers and teachers, this of course led us to think about the young girls we know and care about. We were all moved to tears listening to the girls’ stories; their recounts were completely beyond anything we could comprehend. Melina and her team and working incredibly hard to educate the girls at the safe house in order to give them hope for a bright future. They are also educating communities in hopes of eradicating FGM in the district.

The visit to the safe house was an unforgettable experience for many reasons. The first been the time we spent with Melina discussing the awful realities of FGM.

Speaking with Melina really highlighted the love and care she has for these girls. She is their protector and will not let any harm come to them. She has provided them with a better future and consistently promotes the girls achieving their dreams.

“We are stars of the future”. 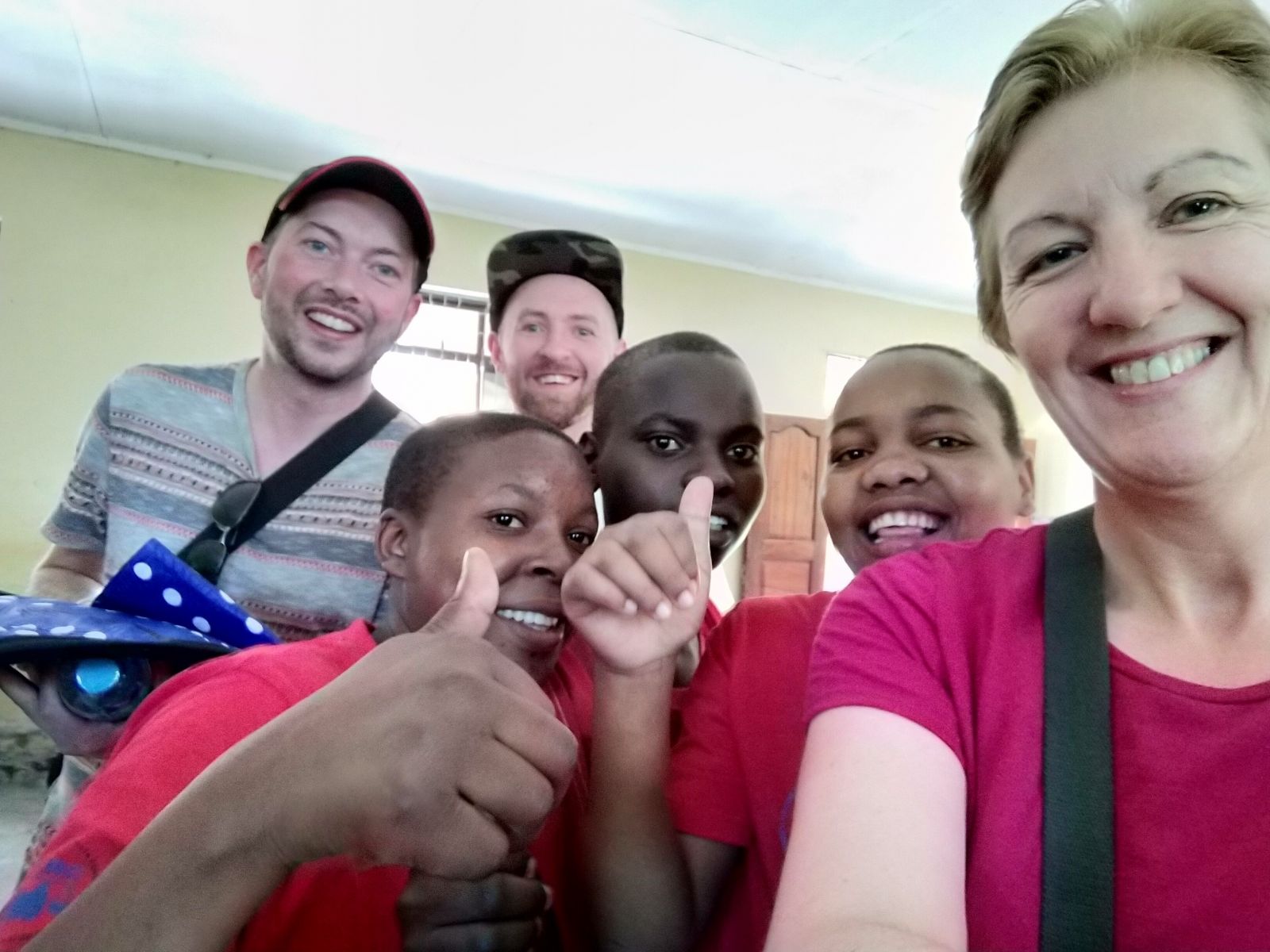 The second unforgettable experience was listening to the girls tell their stories.

As a girl, I could not imagine facing a time when my father, who should be a caring, loving protector decides that it’s time to put his daughter through a soul destroying experience, effectively endangering the life of his own little girl.

Thanks to Melina, she has empowered these girls, showing them their value as women and inspiring them and their communities to be the change for a better future.