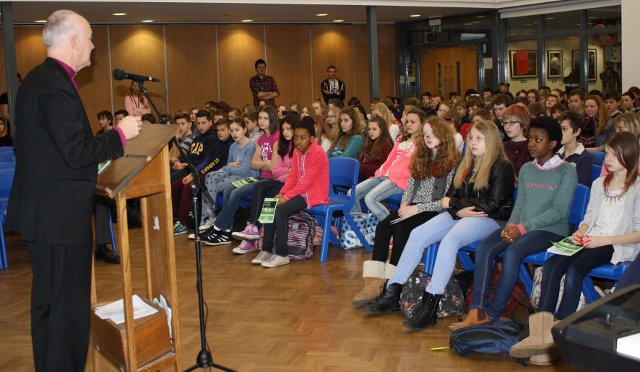 Bishop Nick spent Friday morning at St Aidan’s C of E High School in Harrogate, one of the highest achieving comprehensive schools in the country.

He took assembly for Year 9, and, as it was Red Nose Day, he talked about the examples of humour and laughter in the Bible.

He encountered a variety of lessons including music (where the teacher, Mark Pallant, was playing the bagpipes), French conversation and RS.

And he met with some representatives from years 7, 9 and 13. Head girl Clarrie Pettit, said, “I’ve got friends in many other schools and I know there’s a particular caring atmosphere in St Aidan’s. There’s a lot of support here and the teachers are interested you as a person – not just your education.” They all agreed that it was a relaxed but respectful environment.

Bishop Nick asked them about the good and bad aspects of social media. Clarrie said, “I’ve got family all round the world and despite having only met them twice I feel like I know them because of social media. But on the negative side, I think people can hide behind a screen and say things they wouldn’t say face-to-face”.

Luke Jamieson said that social media can diminish as well as increase the connection between people: “If you’re in a group, it’s often tempting to resort to a ‘computer cuddle’ – so you look at your phone or computer because it’s easier than talking to people.”

St Aidan’s has the largest school-based sixth form in the country (1200 pupils - joint with Roman Catholic school St John Fisher). In relation to its high academic achievements, it  emphasises that it provides for students of all abilities, “including 40 plus students who have a Statement of Educational Needs and who thrive within the school”.