Bible Marathon ends after 83 hours and spreads faith and fellowship

Bible marathon spreads fellowship and faith across the diocese and beyond.

It started as a way to raise awareness of the Bible and almost 83 hours later, the non-stop Bible reading marathon has opened new doors to those of different faiths and none, united a community and spread fellowship far and wide.

The event was held and overseen by the vicar of St Mary’s Gomersal, the Revd Karen Nicholls, who said: “It’s been wonderful. None of us would ever have expected so many people to be interested in just coming into church to listen to the Bible being read.

“We’ve had people pop in while walking their dogs, people who usually just have a smoke outside the door, coming in and having a cup of coffee with us.

“We’ve had a Muslim family, a Roman Catholic family with their children, the people who run the local Nisco shop, and others who have never read the Bible before.

“And for this parish, while it’s been a lot of hard work, it’s really brought us together. I never expected this event to become such a faith experience for everyone, it’s really consolidated who we are as a church community and a parish,” she said.

Bishop Tony, local councillors, MPs,  civic dignatories, a Baroness and people from other church communities across our diocese and beyond all joined in the marathon and scores of them wrote messages of thanks and joy at having taken part in the visitors book. The Gideon Society even turned up and left Bibles for people to take away with them too. 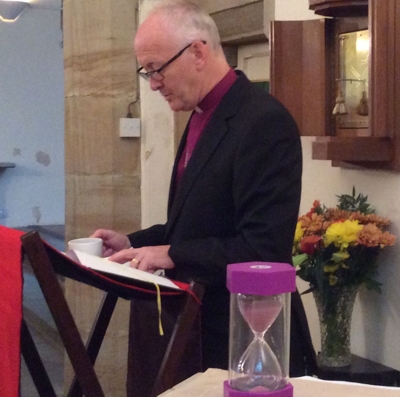 Bishop Nick Baines kickstarted the marathon on Sunday morning when he read the first 15 minutes of Genesis and last night as the marathon drew to a close and it was fitting that the event organiser, Trees Fewster, who came up with the idea read the closing words from Revelation (see video below).

Trees said: “ I never thought that this simple project would have and make such an impact.  It was simple in the way that I didn’t have to write the words, there was no copyright, we didn’t pay the actors and we didn’t have an audition.  Everyone and anyone could take part.  It was truly a God given idea, ambitious, it could have been nerve racking trying to fill 336 slots day and night.  I completely trusted on God that he would help me to find the readers.  And he did!  Not only readers, but helpers, welcomers and refreshments were provided without having asked.

“At the time of organising I was reading the latest biography of Justin Welby.  I was impressed how he always managed to get the local community to take an active part in his ministry.   So, when I was thinking how to fill the night slots I realised that those had to be filled by the local community.  2,700 invitation cards were posted through people’s letterboxes in our parish.  Not only did we get readers, but it also showed that St. Mary’s, Gomersal, is alive and well.

“Several people commented on how they felt that the part they read was meant for them.  My farmer husband and son, who read in the early morning before milking the cows, were reading Ecclesiastes about sowing and reaping, someone else was reading about parts of the Holy Land she had just visited.  Many people read parts they had never read or heard before and it encouraged them to read the Bible more.  One chap who was at first not keen on taking part, but then changed his mind, said that he hadn’t read the Bible since his school days in the 1960’s.  He is now going on a refresher course.

“There has been a lot of talk about it and I wonder if other churches might rise to the challenge.  It certainly was a challenge!” she added.

A Ceilidh will be held in church on Saturday Oct 5 from 7-10pm and the vicar hopes that anyone who dropped in for the Bible reading will come back to join in this social event. Tickets are £5 including hot food.

Trees Fewster, who came up with the idea, read the closing words from Revelation.