When we say that someone is 'down to earth', we usually mean that they are straightforward, unpretentious, with no airs and graces. Their feet are planted on terra firma, and they cannot be accused of being above themselves (or anybody else, for that matter). Being 'down to earth', therefore, is a good thing - something we recognise by its absence in some people's language, behaviour or demeanour. 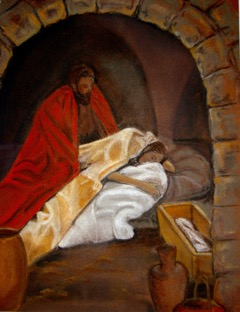 So, it should come as no surprise that Christmas is about as 'down to earth' as you can get. Christmas might be about many things, but it is above all about God not exempting himself from the realities of the world, but opting in to all the world can throw at him (and us). Christmas is fundamentally a celebration of God being down to earth.

Now, this will sound uncomfortable to some and inconvenient to others. After all, isn't God there to be worshipped and feared? Haven't we already got God taped - if not only in order to dismiss what we don't like about religion?

Well, Christmas is supposed to surprise us - something our familiarity with various popular presentations of the Nativity militates against. But, it is meant to break across our fixed views of the world and the way it is, opening our imagination to a new way of seeing God, the world and us. It is meant to subvert our expectations of how the world inevitably has to be, inviting us to look differently, see differently and live differently in the world as it is.

Go back to the original story. God doesn't explode on an unsuspecting planet at the place  of most political significance and compel everybody to turn their eyes to the great event. Most people in Palestine have no idea what is going on. That is part of the irony - the surprising and subverting. And, when it comes to it, it is outsiders - the 'great unwashed' shepherds and pagan foreigners - who are first to have their eyes opened to the mystery born in obscurity in a remote and troublesome corner of the Roman Empire.

In other words, the first Christmas draws the 'wrong people' to Jesus. Not the pious, the prepared, the priests or the pretentious, but those who don't 'belong' and those who least expect to be included. Or, as I once put it (and got into huge trouble with the media for daring to do so), the first Christmas should have led to the singing of "O come, all ye faithless...".

Now, our familiarisation with Christmas, the sentimentalising of our consumer culture and our commercialisation of the celebration, have removed the Jesus of Bethlehem from the real world to somewhere more containable (where we don't have to worry about him growing up into a politically troublesome adult). In doing so, we allow the story itself to become rootless in the real world. And this is problematic.

So, consider this. The baby of Bethlehem was born into a world in which life was very cheap and expectations very limited. This world was dominated by a military power that ordered every part of life and society and dealt brutally with those who challenged its hegemony. The land into which the baby was born was occupied and its people humiliated. Under threat of persecution and death, the baby and his family fled to another country, becoming refugees and asylum seekers in a land whose very name (Egypt) represented slavery, misery and hopelessness. Terrorist groups emerged from the hill country of the north from time to time, bringing death and destruction to those places where the Roman forces exercised their power.

It sounds a bit familiar, doesn't it? A world of insecurity and threat. Not a million miles from a world of ISIS, terrorism, fear and uncertainty.

Well, this baby would grow into the man who defied all power and denied all fear by inviting people to think again (or 'repentance' as it is sometimes known). What if there was to be a people who were not driven by fear, but drawn by hope? What if we could be down to earth, but not bound by earth? What if, while remaining rooted in and committed (body, mind and soul) to this world, we could be free to sit lightly to our status and dignity, our security and self-fulfilment, loving our neighbour as ourself and putting their interests before our own? What might this world look like? What would a society like this lead to?

This is basically what Christmas is all about. God doesn't wait for us to get our act together and sort out our integrity before coming to him with a plan. Rather, God takes the initiative, coming among us as one of us and, ultimately, opening his arms to us in an embrace that absorbs all that the world can throw at him, but without throwing it back.

And this is the point of getting to a church for a carol service. I love the aesthetics of candle light and familiar carols. But, what the church is actually doing - well or badly, but always fallibly - is to create a space, for an hour or two, during which we can be confronted afresh by the mystery of God's surprise - that even God is down to earth, right where we are.

The illustration above is this year's Christmas card from the six bishops; it was designed by Linda Baines.