Jews and Christians from Leeds visit Israel and Palestine together 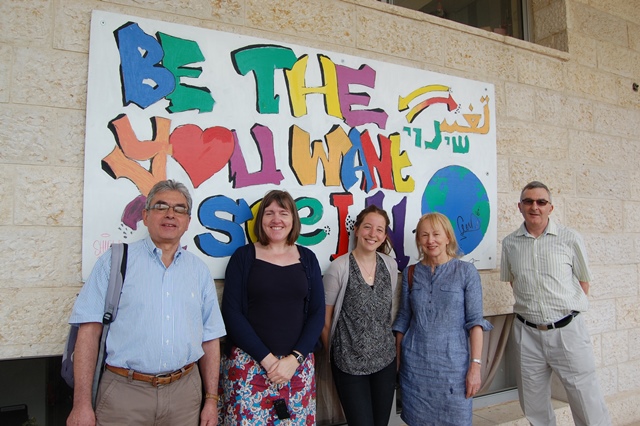 Two members of St George’s Church, Leeds, have just returned from a visit to Israel and Palestine with two members of the local Jewish community. The visit grew out of a group of Jews and Christians in the city who are studying the Israel / Palestine issue together.

‘We have been looking at religious and political issues concerning Israel and Palestine for some time,’ said David Kibble, a member of St George’s Church and one of the inter-faith team. ‘Our trip gave us the opportunity to hear for ourselves what people at ground level in Israel and Palestine are thinking.’

As well as visiting some of the traditional tourist sites such as the Mount of Olives, the Via Dolorosa and Yad Vashem, the group spent a lot of their time listening to Jewish and Arab Israelis and to Palestinians. An Arab Israeli lawyer to whom they spoke said that in order develop real peace the Palestinians would need to develop their leadership skills; this was a point that was made by a number of Palestinians with whom the team spoke. ‘We gained the impression,’ said David, ‘that there are a number of people and groups in both Israel and Palestine who are committed to promoting peace but they remain isolated. There seem to be no real leaders for peace on either side who have captured the popular imagination.’

At Bethlehem University the team met with Professor Sami Adwan, a Palestinian educationalist who is campaigning for Palestinian children to be taught about the holocaust and for Israeli children to be taught about the nakba – when large numbers of Palestinians lost their homes when Israel was founded as a state. Currently children in both communities receive little or no education about their neighbour’s narrative as they see it; Professor Adwan told the team that in most schools on both sides such teaching was not permitted.

One school that does teach its students to understand each other’s narrative is the Hand in Hand School in Jerusalem which the team visited. This joint Arab / Jewish Israeli school is one of just seven in the country where Arab and Jewish Israelis are taught together. The team saw posters around the school that had been made by students which clearly showed that each community had been learning about the other’s narrative. Ruth Walker, from St George’s, said that she thought the way that pupils and staff at the school were free to explore and discuss difficult topics was ‘inspirational.’

The inter-faith discussion group in Leeds has concluded that better education about one another is one of the keys to promoting peace and understanding in the area and yet such education is taking place in only a handful of schools.  Most Israelis and Palestinians whom the team met talked of the need for a ‘bottom up’ approach to peace-making: peace must be generated by the people at ground level and not simply by their political leaders at the top. ‘The sad thing,’ said David, ‘is that politicians on both sides are preventing students learning about one another and are therefore hindering the bottom up approach which so many of those we met were calling for.’

Phil Goldstone, one of the Jewish members of the team, summed up his feelings about the joint venture: 'It was good to make this trip with our friends from St George’s. We were able to discuss what we saw and heard with people who had a slightly different perspective and this gave more value to our visit. All in all our journey together took us into challenging places and situations which proved a most valuable experience.'

Pictured: Left to right, Phil Goldstone, Ruth Walker, Arline Lester and David Kibble with Noa Yammer (school administrator, centre) at the Hand in Hand School, Jerusalem. The poster reads, ‘Be the change you want to see in the world.’