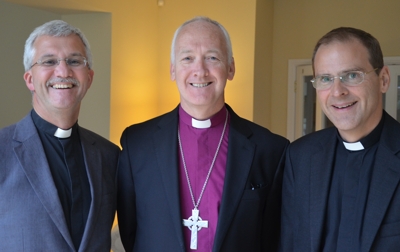 In August 2014, Downing Street announced the appointment of two Area Bishops for the newly created Diocese of West Yorkshire & the Dales:

The Revd Dr Toby Howarth as Bishop of Bradford.

The Revd Dr Jonathan Gibbs as the first ever Bishop of Huddersfield. This is a new bishopric covering the local authority areas of Calderdale and Kirklees and is one of five areas in the diocese, which each have their own bishop.

The bishops are pictured left with the Bishop of Leeds, the Rt Revd Bishop Nick Baines, Diocesan Bishop of West Yorkshire and the Dales.

Nick Baines said, “I am delighted with these appointments which complete our team of bishops. They bring wide experience, great expertise and substantial gifts to our leadership and ministry as we build the new diocese. Both will bring important outside perspectives to this complex task and help bring bishops closer to the ground in parishes and local communities.”

“Toby Howarth brings expertise in teaching, pastoral care, leadership and interfaith relations at parish, national and international level. This is an important appointment for the Church of England and for Bradford where he will serve as Area Bishop.

“Jonathan Gibbs brings to this new office wide experience at parish, diocesan, national and international level.  He has been a committed parish priest and has served in a variety of contexts. His appointment is hugely welcome as he establishes the new episcopal area of Huddersfield.”

Toby Howarth and Jonathan Gibbs  were consecrated as bishops in a service at York Minster on Friday 17 October 2014. 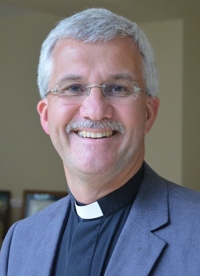 The Revd Dr Jonathan Gibbs (aged 53), has been Rector of Heswall in the Diocese of Chester for the last 16 years. Before that he was Chaplain at Basle with Freiburg-im-Breisgau, in the Diocese of Europe from 1992-98.

Jonathan says: “I am delighted to be coming to Yorkshire and to be joining the new Diocese of West Yorkshire and the Dales at this exciting time.  Toni and I are thrilled to be moving to such a great part of the world, with a wealth of culture in its towns and cities as well as beautiful villages and countryside.  I am looking forward to working with the other members of the Diocesan team to build up the life of our churches both numerically and spiritually and to contributing to the life of the rich and diverse community in West Yorkshire.  I am also very partial to a pint of Timothy Taylor’s “Landlord” and am looking forward to getting to know some more of the local brews!”

Jonathan takes an active role in the Church of England on diocesan, national and international levels: he has been Chair of the House of Clergy in the Diocese of Chester since 2006 and Chair of the Diocesan Clergy Chairs Forum since 2011.  He is a member of General Synod, of the Meissen Commission (which links the C of E with the Evangelical Church in Germany), and of the Clergy Discipline Commission.  He has also represented the General Synod on the Council of British Funeral Services and the Churches’ Funerals Group, focusing on the importance of clergy working flexibly and creatively to support grieving families.

After gaining an MA in Philosophy and Politics from Jesus College, Oxford, he went on to train for the ministry at Ridley Hall in Cambridge, where he also completed a PhD in Theology at Jesus College. He served his curacy in the Diocese of Chester at Stalybridge Holy Trinity and Christ Church (1989-92).

Jonathan is married to Toni who with others set up the Besom charity on the Wirral, which provides a bridge between those who want to give time, money, things or skills and those who are in need, working with over 40 agencies in the statutory and voluntary sectors. They have three children, Harriet (24) who is married to Matthew Curry, Edward (21) and Thomas (18).

Jonathan’s interests include walking, usually accompanied by their Cocker Spaniel, and rummaging in second-hand bookshops. He is fluent in German, Swiss-German and French and he and Toni have a love of France (where they first met).  Jonathan is also a member of the Campaign to Protect Rural England (CPRE) and the Campaign for Real Ale (CAMRA), and is committed to supporting village and community life.  As members of the National Trust and English Heritage, they are looking forward to visiting many of Yorkshire’s historic properties.

Click here to listen to a message from the new Bishop of Huddersfield, Jonathan Gibbs. 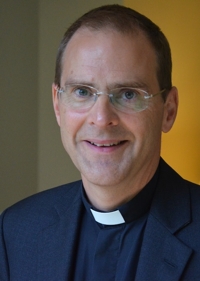 The Reverend Canon Dr Toby Howarth (aged 52), has served as a parish priest, taught and studied in several areas with a variety of different faiths and cultures before working with the Archbishop of Canterbury and the Church of England nationally in inter faith relations.

Commenting on his appointment, Toby says, "It is a great joy to have been appointed as the new Area Bishop of Bradford. The role has no shortage of opportunities and challenges. I am very much looking forward to working with clergy, congregations and ecumenical partners in the diversity of the city itself, the surrounding towns and rural areas. I am also looking forward to engaging with the communities of which our churches are a part, and building relationships with those involved in the range of civic, statutory  and community organisations which make up this vibrant metropolitan district. The Church of England has been bold in creating the new Diocese of West Yorkshire and the Dales, and it will be exciting to work with Bishop Nick Baines and the diocesan leadership team in developing structures that will better enable local churches to flourish and to serve their communities. I want to pray, to look and listen for what God is doing here so that I can join in and take my part."

After graduating from Yale University in the US, Toby returned to the UK to work as a research assistant and postman before training for ordination in Birmingham, Oxford and Uganda. He was ordained in 1992 and served his curacy in Derby before moving to India with Henriette, his wife, who is from the Netherlands. There they joined the Henry Martyn Institute for Reconciliation and Inter Faith Relations in Hyderabad where he researched for a PhD in Islamic preaching from the Free University of Amsterdam while Henriette taught at a local theological college. In 2000 they moved with their two Indian-born daughters to the Netherlands, where Toby worked as an Evangelist at the Netherlands Reformed ‘Pilgrim Fathers Church’ in Rotterdam. Two years and another daughter later, they moved again, to Birmingham, where Toby became Tutor and then Vice Principal at Crowther Hall, the CMS Training College at Selly Oak, and Henriette was ordained in the Diocese. From 2004 to 2011 Toby was Priest-in-Charge at Springfield, a multi-cultural parish in the South East of the city. From 2005 he served also as Inter Faith Advisor to the Bishop of Birmingham before moving to London to take up his role with the Archbishop of Canterbury in 2011.

As well as helping to develop the church’s relationships and formal dialogue with other religious leaders on issues from global trafficking to religious freedom, Toby has also had responsibility for the Church of England’s ‘Presence and Engagement’ programme (www.presenceandengagement.org.uk) that seeks to encourage dioceses and churches to reach out to and work with people and communities of different faiths. This is led by a national Task Group chaired by the Rt Revd Tony Robinson, now Bishop of Wakefield, and includes several people from West Yorkshire. Toby’s believes strongly that wherever the Church is, Jesus calls it to become a community that lives out his love and compassion.

Toby and Henriette have three daughters: Franciska (17), Lucy (15) and Tamar (12). They enjoy London and being a part of their local community of Peckham, and as a family they are actively involved in their local church. Whenever they can, they like travelling together, particularly linking up with friends across Britain, Europe and further away. On a day off or holiday, Toby enjoys visiting a museum or gallery, reading a novel, playing music, camping or going for a bird-watching walk or cycle ride.

Click here to listen to a message from the new Bishop of Bradford, Toby Howarth.

DIOCESE OF WEST YORKSHIRE AND THE DALES

At  Easter, 2014, history was made with the creation of the Diocese of West Yorkshire and the Dales, the first new diocese in the Church of England since 1927, and, at 2,630 square miles,  one of the  largest dioceses in England  by area.

The new diocese stretches from Huddersfield and Holmfirth in the south-west to Richmond and the River Tees in the north-east  and from Barnsley in the south-east to Bainbridge in the north west. With a population of 2.3 million people served by 656 Anglican churches, it includes the cities of Leeds, Bradford and Wakefield, West Yorkshire towns such as Dewsbury, Huddersfield, Keighley, and Halifax  as well as North Yorkshire towns including Skipton, Catterick, Harrogate, Richmond and Settle.