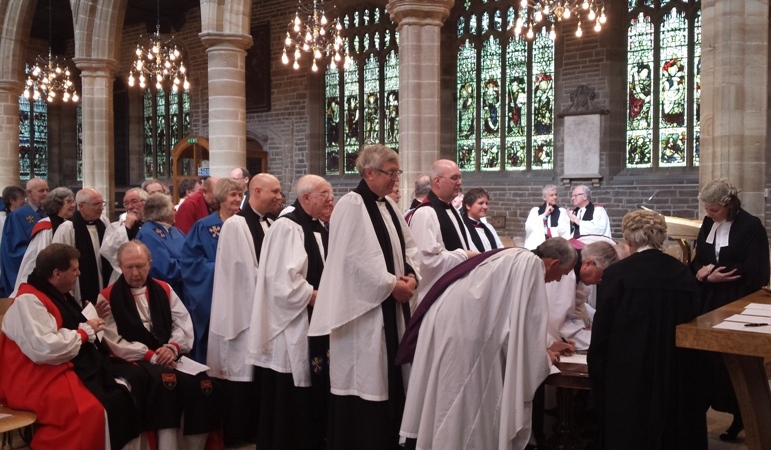 A new united College of Canons representing all three cathedrals in the new diocese has gathered together for the first time, at the request of Her Majesty the Queen.

The royal summons or ‘Conge’ d’Elire’ brought together 95 of the 110 members of the College of Canons at Wakefield Cathedral to elect Bishop Nick Baines as the first Bishop of Leeds.  The College includes the deans, bishops and archdeacons from across the new diocese, together with the honorary lay and clergy Canons of Wakefield, Ripon and Bradford cathedrals.

The gathering was chaired by the Dean of Wakefield, Very Revd Jonathan Greener,  and as well as hymns and prayers, the College heard the conge' de’elire and ‘Letters Missive’ from the Queen read out, and then elected Bishop Nick as the new bishop by a unanimous show of hands. Members are pictured lining up to sign the Certificate of Election. The gathering also appointed Mrs Linda Mary Box as Clerk to the College.

The election of a new bishop by the cathedrals goes back to medieval times, but under Henry VIII it became compulsory for the cathedral representatives to ratify the King’s own choice as bishop.  Since 1998 the election has been by the College of Canons of each Cathedral rather that the Cathedral Chapter. The Queen herself accepts the Prime Minister’s nomination which follows the Crown Nomination Commission’s recommendation.