Pupils from Holy Trinity School, Barnsley, gave army medics a welcome Christmas surprise when they sent cards and gifts to cheer members of the Ministry of Defence Medical Unit, (MDMU) as they worked to help victims of the deadly Ebola virus.

The soldiers were overwhelmed by the packages and one of the organisers, Chela Wilson was delighted to receive a phone call, asking for their thanks to be passed on, followed by an email and a photograph from one of the soldiers who had received a parcel. 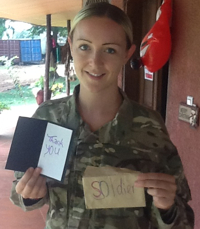 Now, back in the UK, one of the soldiers, Private Emma Caton, explained just how much their gifts had meant:
“The parcels absolutely lifted the spirits of everyone that received a surprise parcel from the children. Especially on Christmas Day, as not everyone had something sent out to open from their families. It was really heart-warming that the children had put time and effort to put them together to make us smile on Christmas Day. I'd like to say a massive thank you.”

The crisis caused by Ebola led to the MDMU being deployed to Sierra Leone to care for health workers who have caught the disease.
Holy Trinity pupils came up with the idea of making sure that soldiers serving with the unit – who were away from their families for three months – had something to open on Christmas Day, after leading a school assembly about ‘hope’.

Holy Trinity teacher, Chela Wilson, whose brother-in-law is a medic in the army, coordinated the project, alongside art teacher Louise Seagrave. Chela explained how the idea had come about, after the pupils had seen the Sainsbury’s advert about the First World War soldiers at Christmas. 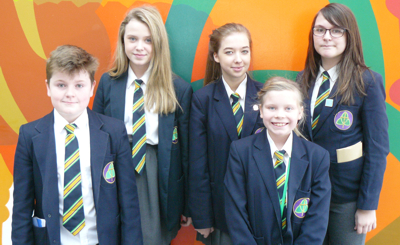 “The kids were really quite moved by the theme of the Sainsbury’s advert and soldiers being away from home in tough places, so we decided to make and write cards for the soldiers in our British Forces who are away from their families at Christmas. Our aim was to give them some 'Hope'.”

The parcels contained useful items for the soldiers, such as toiletries, which they often run out of and can’t replace as there are no shops nearby.

Jonathan Foyers (Year 7) at Holy Trinity was happy to hear from the team and said,
"It was great when we heard that we got feedback from the soldiers. It was also good that they got cards for Christmas.”

Ailish Pope (Year 11) explained why she wanted to be involved,
"It was a nice way to show how we appreciate their work. It was also a touching reply."