The original Miss October will be visiting St Philip’s Church in Birchencliffe this month to speak about her involvement in the original Calendar Girls line-up, discussing her life and her role in creating the Alternative WI Calendar which raised millions of pounds for Leukaemia and Lymphoma Research. 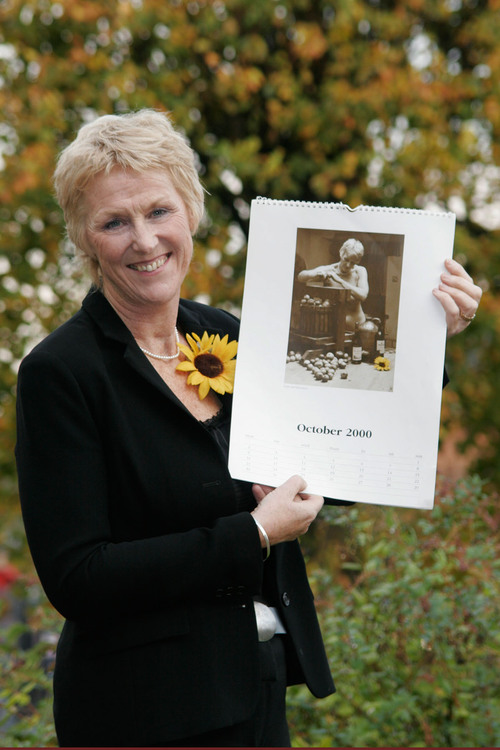 On the 22nd October, Tricia Stewart will share her experiences with those in Birchencliffe, from arriving in the village of Cracoe and joining the WI, to making the Calendar, receiving incredible amounts of local and national press and meeting Dame Helen Mirren.

Organised by the St Philip’s Church fundraising group, the money raised from the event will go towards the Church funds and a generous donation will be made to Leukaemia and Lyphoma Research.

The image on the left shows Tricia with a more recent Alternative WI Calendar - image taken from Tricia's Twitter profile.

One of the organisers, Church Warden Karen Haigh says, “Though this event is held as a fundraiser we also think it’s very important that they are also social events – both for our congregation and also for our local community.

“We thought if we could arrange for Tricia to come one evening it would be a popular event – especially as there is quite a lot in the news at the moment about the forthcoming Calendar Girls Musical.

“A few of our congregation have heard Tricia speak and said how much they’d enjoyed listening to her and how much they’re looking forward to seeing her again.”

Karen adds, “A lot of us have seen the film and the stage show so it will be lovely to meet her – the original Miss October and the driving force behind the calendar.”

She suggested making a joke of the original WI Calendar which traditionally featured images of sheep, hills and peaceful village greens.

The eleven Calendar Girls made the Alternative, nude version in April 1999 and set out to raise just £5,000 for cancer research in memory of John.

Tricia found fame and was thrown into the spotlight once again after she was played by Helen Mirren in the 2003 film adaptation of her story and by Anita Dobson in the 2009 West End production of the Calendar Girls.

Since 1999, Tricia has changed the image of the WI forever and has helped contribute huge donations towards vital cancer research, with her story still inspiring many across the world today.

To find out more about Tricia Stewart and the Calendar Girls, please visit her website: http://www.wicalendargirl.com/