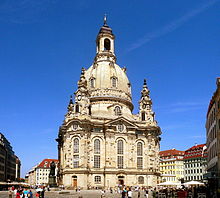 As Brexit storms thunder on, Bishop of Huddersfield Jonathan Gibbs has preached in Dresden's Frauenkirche, rebuilt after being destroyed by Allied bombing in the Second World War. 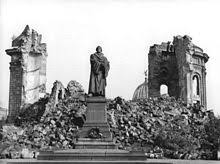 Bishop Jonathan gave the sermon in German at a special service last month and drew on his international life experiences to call for Christian clarity in precarious political times.

Describing his parents as "migrant workers" who moved from South Wales to Manchester, where he was born, Bishop Jonathan studied at Oxford, then worked for an Anglican church in Paris for two years.

He was made Bishop of Huddersfield in the Anglican Diocese of Leeds in 2014.

"I studied for some time in the United States and my combined international experiences shapes the way I look at the world and also the way in which I read and interpret the Bible.

"I see myself as British, but not fully English, but I also see myself as European, at home to some extent in each of the three other nations in which I have lived and worked.

"I have lived outside my own culture, I have had to learn new languages and when living in those countries, there have been times when I felt an outsider, in cultural and in political terms.

In the sermon he warned how fake news, distortions and lies on the Internet pose a dark threat to concepts of truth in society and said that Christians everywhere must strive to shed light on those dark places:

"Whatever the future may bring after Brexit in political terms, as Christians we must work to ensure that God’s love for the world is reflected in all our relationships, and above all in the deepening of the relationships between our churches."