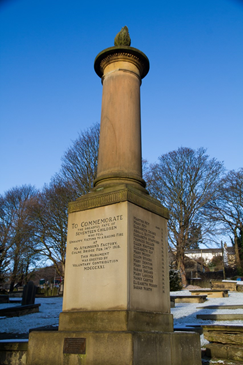 The bicentenary of a terrible mill fire which claimed the lives of 17 young girls and women will be commemorated at a special service at Kirkheaton Parish church.

Its Rector, Ian Jones explained: "I know this event took place two centuries ago; nevertheless, it was a truly appalling tragedy and those who died are buried in our churchyard.

"I therefore feel it is entirely right and proper that the dead and the survivors are remembered and honoured on such a significant anniversary."

On St Valentine's Day, February 14, 1818, ten-year-old James Thornton was working through the night, along with 25 other children and adults, at a cotton mill in Colne Bridge.

At about five o’clock that morning, James was sent by the foreman, James Sugden, to the basement to obtain some rovings (cotton fibre twisted into strands). James carried a naked candle, and whilst in the dark basement, the lad accidentally brushed the flame against some of the cotton fibres, which duly caught fire.

Two young girls on the first storey noticed the fire through the slits in the floor, but when they tried to alert the foreman, they were ordered back to their stations.

The fire was so intense and spread so quickly, only nine of the workers managed to get out of the burning mill.

The victims were buried together in a communal grave in Kirkheaton Parish Church’s graveyard two days after the fire, and three years later in 1821, a permanent memorial, which still stands today, was erected in memory of those who died.

A special Service of Commemoration for the victims will take place at 11am on Saturday, February 10 and will be filmed by BBC Look North as part of their Inside Out programme to be screened on Monday, Feb 12 .

Rector Ian added: "May I encourage you to attend this service if you possibly can. It would be good to have a strong presence there of Kirkheaton Parish regulars, alongside those who do not normally attend worship here.

"Within the service a plaque commemorating the fire and the children’s burial will be unveiled.

"However, in other countries it is still very much a reality and often with health and safety very reminiscent of that cotton mill 200 years ago.

"We thus need to pray this will stop as quickly as possible and that soon no child will be forced to work - largely to make products for us in the West.

"And let us do all that we can – perhaps setting up a monthly standing order to a children’s charity such as Save the Children, Compassion or World Vision – to make this hope a reality for a child somewhere in the world in 2018.

"That is perhaps the best way that we can honour the Colne Bridge fire victims and do something positive in their memory."