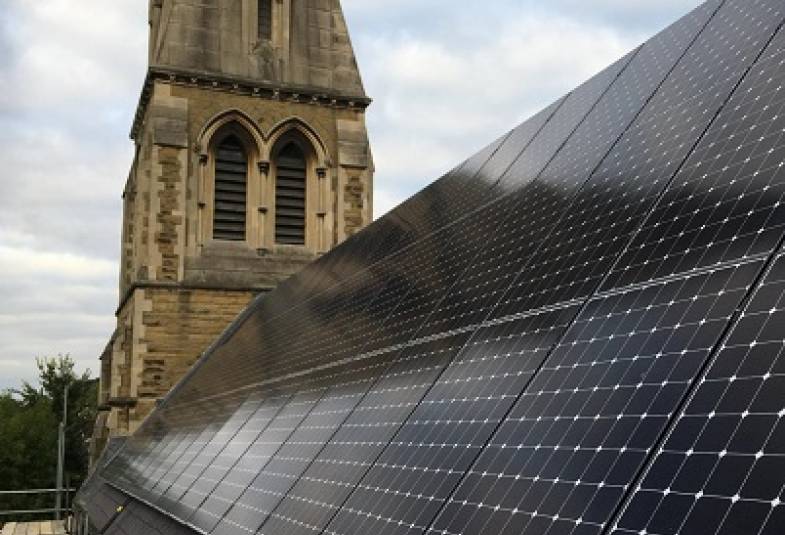 Solar panels are high on the agenda as the Church of England marks the Season of Creation which includes a focus on environmental protection.

Yet it’s not just the large-scale buildings that have seen solar panels being erected.

St John’s in Old Trafford, Manchester, installed 39 panels on the side of its Edwardian building in 2015.

Since then it has produced 60,000 kilowatts of electricity – more than enough to power the church hall with the rest sold to the National Grid as part of the Government’s Feed in Tariff (FiT) scheme.

The money raised has not only helped support the church, but also fund community projects.

“Running our parochial renewable energy as a cooperative has enabled us to work with a wider cross section of our community. It’s been a great a FiT in more than one sense.”

“Solar panels have a huge potential for churches to cut their carbon emission and be a witness to the local community. They are a visible statement that we care about God’s creation and are taking action on climate change.”

“We already have a few churches in the diocese who pioneered installing solar panels a number of years ago, including Bradford Cathedral, when the government subsidy was at its height.

“Since then the price of panels has fallen significantly. There is also a much greater awareness that our churches need to move away from fossil fuels and onto renewably generated electricity.”

“The Diocesan Advisory Committee (DAC) has recently put in place new environmental principles, which are sympathetic to appropriate faculty applications for solar panels and other renewable energy generation.”

“We are looking for churches in rural areas in the diocese who would be interested utilising money from the Rural Community Energy Fund for a feasibility study for solar, renewable energy generation or heating projects.”