Links built up with diocesan trip to Tanzania

Close friendship and deep ties were seen during a team from the diocese’s recent trip to Tanzania.
During February 16 clergy and laity from the Diocese of Leeds spent two weeks travelling to and across the Mara region of the country.
The link between the Diocese of Leeds and the Dioceses of Mara, Rorya and Tarime in the Anglican Province of Tanzania was formed some 30 years ago and exchange visits have been a key feature of the link since its inception.
The trip provided a opportunity to be with Christians in a very different context to the UK; to witness the ways in which community development and evangelism work together; and to learn something of the challenges faced by those living and working in East Africa.
The team from Leeds heard first-hand about some of the challenges in education in Tanzania.
Government schools typically feature pupil to staff ratios of 120:1.
Free education has just been extended from primary only to primary and secondary, but entry to secondary school remains conditional on passing the Standard 7 exam (aged about 13).
Fewer than 50% of children currently achieve this standard.

Part of the church’s response is the provision of fee-paying church schools where staff: pupil ratios are more favourable, and exam results excellent.
Links with Leeds schools are highly valued.
The trip included visits to a Bible College, girls secondary school and vocational training centre, all in the town of Bunda.
Ruth Dent, from St James’ Woodside, said: “I think one thing that has struck me is how important the link with Leeds Diocese obviously is to the church/schools/projects we saw.
“The people were so welcoming and excited to show us, proudly, all they were trying to achieve.”
The team also heard about the efforts of the church to challenge tribal practices, including FGM and marriage for young teenage girls.
During a visit to the Safe House for girls in Mugumu in the Serengeti District, they met Wanda, a social worker who is currently volunteering for the Diocese and heard about many successes in reconciling girls with their families.
A number of people in Leeds support the work of the Safe House with regular giving.
This money is still desperately needed and being spent on the important work of education and cultural change. 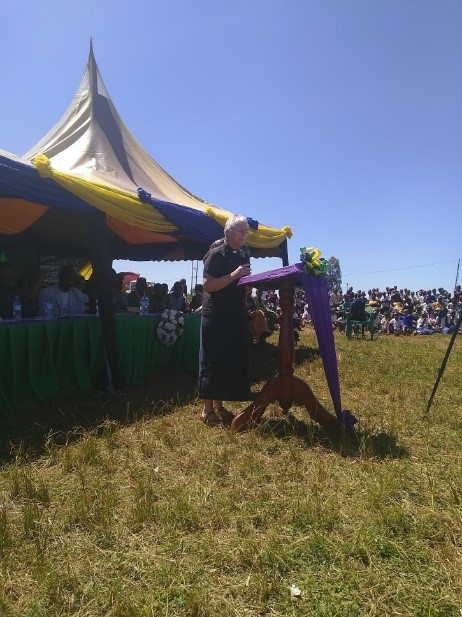 Another of the ways in which the link supports development work and evangelism is in the promotion and funding of water projects.
The team visited a number of new installations, including those at Buhemba Community Development Training Institute and Nyabitocho Parish.
One highlight of the visit was the civic opening of a water harvesting project on a school at Kemakorere in the Diocese of Tarime.
Canon Maggie McLean, in one of her last acts as Tanzania Link Officer after her move to York Minster, was invited to make a speech at the event, which she partly delivered in Swahili.
Canon Hilary Barber, Vicar of Halifax, said: “Travelling to Africa is about seeing and believing in all that God is doing across the world and strengthening the bonds of friendship that hold the Anglican Communion together.”