Three things you may not know about the Mothers’ Union…

Embracing Difference, a day conference organised by the Mothers' Union to encourage awareness of the riches and challenges of inter-cultural relationships and marriage in our diverse and multi-faith society revealed some less well-known information about the organisation...

1. The largest Mothers’ Union Group is in Baghdad with 1000 members.
A fact revealed by Provincial President, Barbara Taylor at the ‘Embracing Difference’ Conference organised by Mothers’ Union last Saturday. 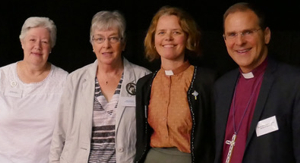 2. The newest members of the Mothers’ Union in our diocese are Bishop Toby and his wife Henriette.
Bishop Toby was enrolled as a member of the Mothers’ Union on Saturday at the conference. He said he had been inspired to join through witnessing the work of the Mothers’ Union first hand on a recent trip to Sudan and also by his friendship with Jean Bailey, former Bradford Area President until her recent death. Jean was a passionate and delightful advocate of MU.
Toby’s wife, Revd Henriette Howarth was recently enrolled at St Paul’s Shipley, where she has just become the new incumbent.

3. Mothers’ Union works in prisons – both in Sudan and here in Leeds Diocese.
While in Sudan, Bishop Toby saw how the church is sustained by Mothers’ Union members. He also heard of the powerful ministry they offered, supporting those in prison.
Mothers’ Union members help in a number of prisons around the diocese from HMP Armley and Wealstun to New Hall near Wakefield.  Why? Because one of the objectives of the Mother’s Union is to support families whose life has met with some adversity. More.

These were just some of the fascinating facts and ideas from last Saturday’s Conference ‘Embracing Difference’ organised by the Mother’s Union.

‘Embracing Difference’ looked at the riches and challenges of inter-cultural relationships, marriage in particular. Bishop Toby together with his wife Henriette and Janet Fraser-Smith led the sessions. 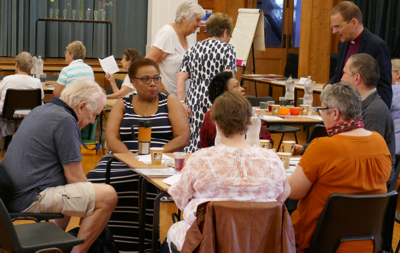 Bishop Toby commended the Mothers’ Union for organising a conference that was so timely and relevantly to our nation at this time.

He went on to say that it was important in all inter-cultural relationships or encounters, for Mothers’ Union members to be aware that they are first and foremost, Christian. Being secure in your faith was at the heart of any inter-cultural encounter.

Henriette reminded the Conference that when we read the Bible, we are interacting with a culture over 2,000 years old, a culture very different from our own.

Janet showed how words and actions are filtered through our individual cultural lenses and therefore often appear different from what was intended and lead to miscommunication. She also highlighted how different cultures bring new delights into a marriage, as well as areas of unease.

The Conference concluded with a forum of three inter-cultural couples, one British-Canadian; one British-Togolese and one Australian-Barbadian. The forum  was led by Henriette, born in Holland and her husband Bishop Toby, born in Kenya.

Find out more about the Mothers’ Union.