Vicar of Lindley gets her own scarecrow for harvest

SCARECROWS brought fun and joy to the village of Lindley as part of this year's Harvest Festival.

The village held its first Community Scarecrow Festival event over the weekend. It was an ecumenical initiative between St Stephen's Church and the local Methodist Church, the Love Lindley group and local businesses. 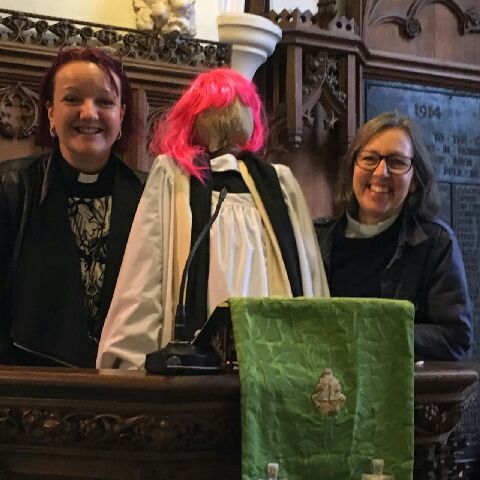 Pictured left is our Vicar of Lindley, the Revd Rachel Firth and the Methodist Minister, Sally Spencer – putting the finishing touches to Rachel’s own scarecrow in the choir stalls of St Stephen’s.

Scores of families joined in the trail round the village and enjoyed the festival and the Lindley Band played an informal concert on Saturday afternoon.

Kenn Winter, a member of St Stephen’s said: “Lindley's scarecrow festival has been a joy for many local families, with the churches right at the heart of the local community.`’

Nicola Lee, owner of the Children’s Bookshop on Lidget Street, said the festival, which ran from Friday through to Saturday tea time, created a buzz in Lindley.

“Both churches and both schools have got behind it,” she said.

“The shops and businesses have created scarecrows and people have been having selfies with the scarecrows.”

“It’s creating a real buzz. People are having their photos taken with the various characters including Postman Pat outside the Post Office and Humpty Dumpty.

"And it was a joy to see the kids come running out of school excited to see all thie different characters through the village,"she added.

You can watch a short video of the festival on our facebook page courtesy of the Huddersfield Examiner.