The JMYC is a new initiative of the RSCM, and the five children and young people were invited to its first ever Summer Residential in Salisbury after attending an audition day at Halifax Minster in the spring.

The four-day programme was led by Hugh Morris, the Director of RSCM, and also included singing at other services in the city and at Sarum College Chapel.

The Revd Richard Frith, Vicar of Holy Trinity & St Jude's, said: "It's been an amazing week for these five choristers, but also for our parish.  We are so proud of them and of all our Young Voices.  Since we started the children's choir in 2015 they have been such a blessing to us, enhancing the quality of our Sunday worship and bringing new people into church. 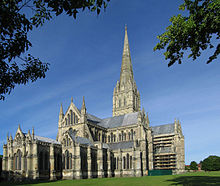 "I was a chorister when I was young, and it's still a great way of learning the faith, making friends, and gaining the confidence to do something really well."

Holy Trinity & St Jude's Director of Music Margaret Seed added: "The children have really grown in confidence during the week. We look forward to seeing them pass on all that they have learned to our younger singers."

Young Voices was started three years ago at Holy Trinity & St Jude's, which had not previously had any children in its choir for several years.

The emphasis is on fun and friendship alongside some serious singing.  There are now eleven children in all, rehearsing on Friday evenings and helping to lead worship at the Sunday morning Eucharist.

he choir's success has led to growth in other areas of the church's children's work - the latest being a new youth group.